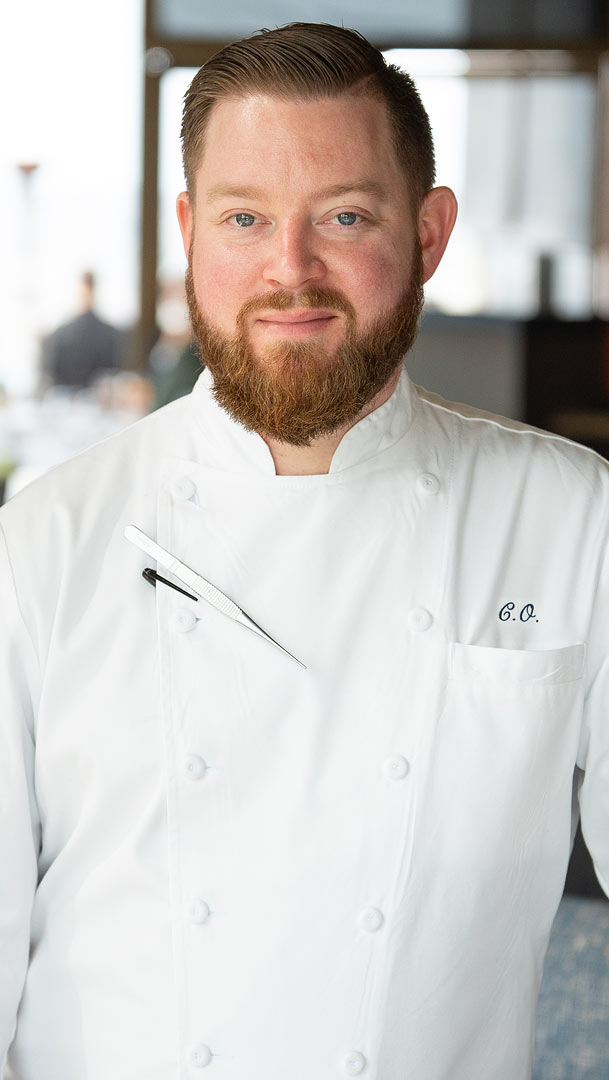 West Virginia native, Christopher Osborne inherited a passion for cooking at an early age, though his formal entrance into the culinary world did not begin until after he enlisted in the Navy in 2001, where he served for five years. Upon his return home, Osborne was introduced to Daniel Humm (The Nomad, Made Nice, and Eleven Madison Park), who helped launch his professional career in the industry. Humm guided Osborne’s path by connecting him to mentors, allowing Osborne the opportunity to stage at Charlie Trotter’s, Alinea, Eleven Madison Park, French Laundry, and The Restaurant at Meadowood, spending several months at each. Personally, Osborne found more value in hands-on experience versus enrolling in culinary school and has incorporated that mentality into his current role at Mister A’s. One of his favorite parts of his job continues to be mentoring others and witnessing the progress and success of the youth around him in the kitchen.

In early 2017, Chef Osborne joined Pendry Hotel San Diego. He worked as the opening chef of the resort’s all-day Provisional Kitchen restaurant when it gained recognition as one of the “Top 100 in the World” by Travel & Leisure. Osborne departed the company after his 6-month contract expired in June 2017 to take the lead role at Counterpoint in Golden Hill, then moved to BIGA in November 2017. Cut to 2019, where Chef Chris Osborne excitedly joined Mister A’s kitchen, inspired by the rich history of the building and the gorgeous view of San Diego’s skyline.

Following his belief that the staff and ambiance of the restaurant lay the groundwork for a truly special dining experience, Chef Osborne adds his own touches to the menu. His style of cooking is produce-focused rather than protein-focused, thinking about the bigger picture to express cohesive flavors. Each component has a purpose and is eliminated if it does not, allowing Osborne to fully encapsulate the flavors and enhance the overall experience by increasing functionality in food.

Osborne credits the success in his career to the impressive women in his life: his great aunt owned multiple, reputable, well-run restaurants, his grandmother was one of the first well-known female architects in the US, and his mother, an artist, took on various career paths in order to support him and his dreams. Together they have been a strong influence on his career path through contributions to his love for cooking, appreciation for design, and his commendable work ethic. When Osborne isn’t in the kitchen or studying food and wine, he can be found spending time with his wife and daughter, learning new tricks in the boxing ring or sampling the area’s ever-growing restaurant scene.