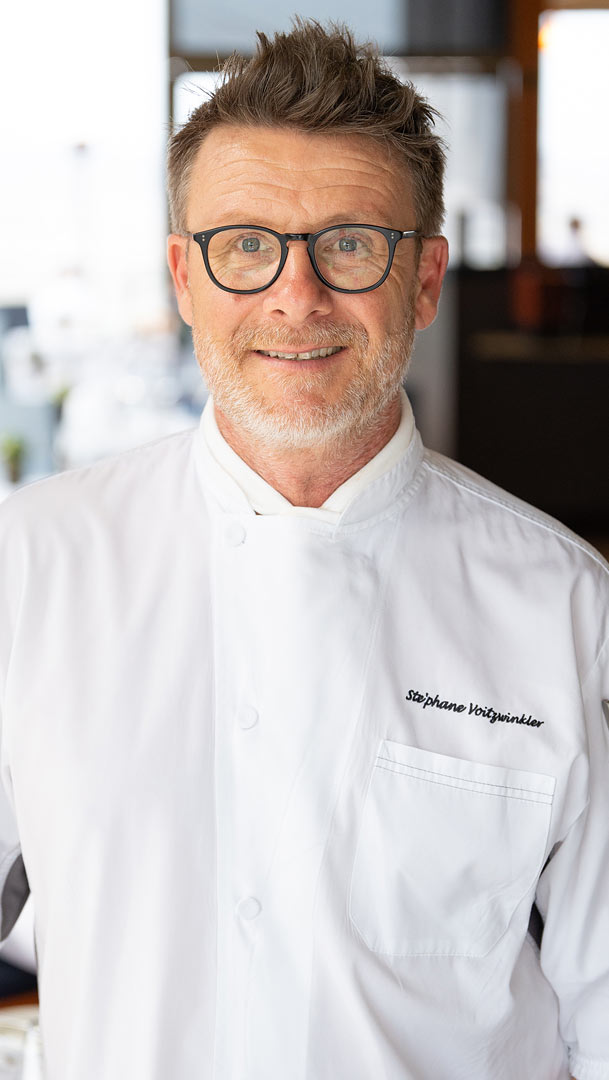 Chef de Cuisine Stephane Voitzwinkler considers himself lucky: lucky in that he has been able to pursue his passion for the culinary arts with such ease. Unlike his father, who was locked into running the family gas station, Chef Voitzwinkler was permitted to create his own career path. While “Grandpa made Dad do what he did, Dad let me do what I wanted.” What he wanted to do was spend a lot of his time in the kitchen “hanging out with Mom” and learning the foundations of his future profession. At age 14 he enrolled in the ÉcoleHotelière de Guebwiller and later apprenticed at Au Bon Coin restaurant and began his education in the professional world of cooking in earnest.

While he humbly attributes his success to luck, the reality is that if it weren’t for his skill and his spirit of adventure, Chef Voitzwinkler’s culinary career would not be nearly as prestigious as it is. It was his talent and his daring side that led him at age 20, with no knowledge of the English language, to move to London for a job in the kitchen at Le Meridien. It was these same qualities that sent him overseas to Le Meridien in Coronado and later led him to an esteemed position as Executive Sous Chef at Sally’s Seafood on the Water at the Manchester Grand Hyatt. It is why Bertrand Hug, the well-known San Diego restaurateur, invited him to head the kitchen at Mister A’s, where he has been inspiring diners with his fresh flavors and decadent dishes ever since.

Chef Voitzwinkler brings a variety of influences to his menu for Mister A’s. He cites the many kitchens he’s worked in as major sources of inspiration: “I’ve been fortunate to work at well-known places and with well-known chefs…Every place I’ve worked at has influenced me. I learn everything I can in every place I work.” His Alsatian upbringing infuses his cuisine with this region’s unique mixture of cultures: while French ingredients and techniques dominate, the Alsatian German influence makes itself evident in Mister A’s dishes like spaetzel, choucroute and house made sausage. His emphasis on fresh, local produce and simpler, more straightforward preparations is distinctly Californian, with lighter, more health-conscious dishes balancing out the more calorically indulgent French and German-inspired fare. However, the distinctly European culinary richness still makes a formidable presence: while escargots are not listed on the menu, they are available word-of-mouth and as Chef Voitzwinkler admits, there is always plenty of delicious butter used in the creation of Mister A’s dishes, even if it isn’t always mentioned on the menu.

The changing seasons and the impact they have on local produce are perhaps Chef Voitzwinkler’s greatest muse. He sources all of his produce from Chino Farms in Rancho Santa Fe and varies his seafood use based on what is available from local purveyors. The Mister A’s menu, therefore, is constantly changing depending on access to and availability of fresh ingredients, ensuring that guests experience the highest quality flavors.

Chef Voitzwinkler’s main motivation in the kitchen is pleasing his customers. He acknowledges that, since the restaurant has such a reputation for its uncompromised view of the city, he works extra hard to make sure that his dishes are equally impressive: “I want them to not only enjoy the view and this beautiful restaurant, but I want them to enjoy the food as well.” It is this desire for customer satisfaction that governs his emphasis on light and simple preparations, arising from the knowledge that with more complicated techniques there is “more likelihood of failure” as well as his embrace of San Diegans’ less adventurous palates.

While Chef Voitzwinkler describes his style as “simple” it is by no means simplistic. Everything in the restaurant is homemade and every component of every dish is given the same amount of attention and care: “I care about everything,” Chef Voitzwinkler reveals, putting as much “care into making a burger” as everything else. This attention to detail is truly what distinguishes Mister A’s from other restaurants. The flavorful cuisine, the pampering service, and the stellar view combine to make the Mister A’s experience such a memorable dining spectacle. And through it all, Chef Voitzwinkler and his expert staff are there in the wings, making sure the elaborate show goes off without a hitch.